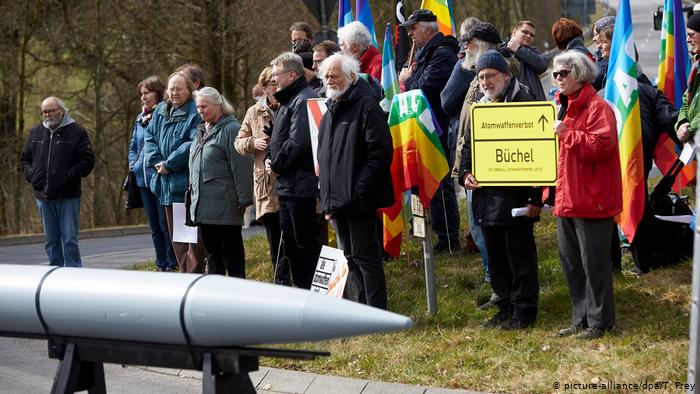 The US has stored nuclear bombs across Europe as a deterrent against Russia — including in Germany, where parliament voted in 2010 to withdraw the bombs. But for now, they are here to stay — and set to be modernized.

Viewed from above, the fields surrounding Büchel air base stretch out like a greenish-brown patchwork quilt, punctuated by the small villages and woodlands that make up the Eifel region in western Germany.

Take a closer look at satellite imagery, and you can make out several dozen camouflaged airplane hangars. Hidden deep below them lies a carefully guarded secret: underground vaults housing American nuclear bombs that date back to the Cold War.

The precise number of bombs stored in the underground vaults in the air base is unclear. Estimates range between 15 to 20, and their location is a state secret. So secret that local resident Elke Koller, a now retired pharmacist, only found out about their existence through media reports in the mid-1990s — despite being a member of the local Green party at the time.

She told DW that learning of their existence came as a “complete shock.” She has since become a veteran protester, organizing local marches and rallies against the bombs.

The German government has never officially confirmed the existence of the nuclear bombs in Büchel. Indeed, parliamentarians would risk prosecution on the grounds of divulging a state secret, should they officially acknowledge their location.

On the record, the Germany government only admits to being part of what is officially termed a “nuclear sharing agreement.”

In the case of a nuclear strike, the American soldiers who guard the bombs located on the German air base — with an order to shoot at any intruders — would attach the bomb to German fighter jets and activate the code. Then German crews would embark upon what insiders refer to as a “strike mission” — delivering the American bombs to their destination.