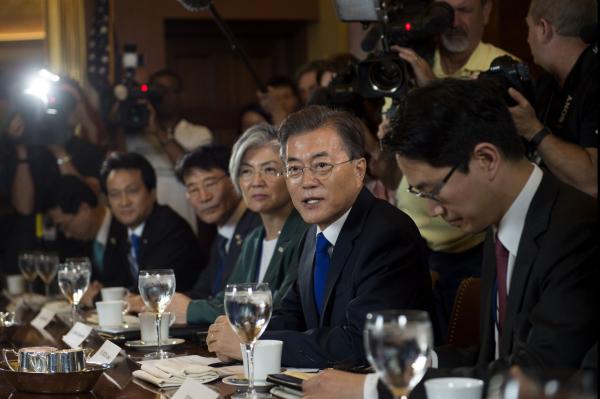 Written by By Elizabeth Shim

North Korea is a small country, but the Kim Jong Un regime is expected to loom large at the first summit between U.S. President Donald Trump and South Korean President Moon Jae-in.

Trump and Moon, who will meet for the first time Thursday, face the same challenge: a belligerent Pyongyang that has refused, for the most part, to comply with international calls for denuclearization.

The two leaders have also been the targets of North Korea bluster. Pyongyang recently claimed Trump’s immigration policy is a U.S. version of Nazism, and accused Moon of following an “imperialist” ally.

But despite Moon’s statements stressing commonalities with Trump’s approach to North Korea, others are not so sure whether the two men, an American billionaire real estate developer, and a South Korean human rights lawyer, would see eye to eye at the crucial summit.

Marcus Noland, an expert on North Korea at the Peterson Institute for International Economics in Washington, D.C., told UPI in a phone interview the United States and South Korea are on a “potentially dangerous trajectory at this point” because of different approaches to North Korea.

“The problem we face now is just at the moment where there is some evidence both the United States and China are starting to increase pressure on North Korea, the Moon government comes along and is signaling with various degrees of enthusiasm from day to day a more forward-leaning engagement policy,” Noland said, adding pressure with a side of diplomacy is an approach the United States and South Korea should share.

China is a key player, but a South Korean lifeline to Pyongyang could upset the balance of cooperation on sanctions, the analyst added.

“It’s important to remember Beijing will not take a harder line on North Korea than Seoul does,” Noland said. “So if Seoul goes in there and starts this kind of engagement, whatever kind of cooperation we’ve been getting out of China over the last six months is going to dry up.”