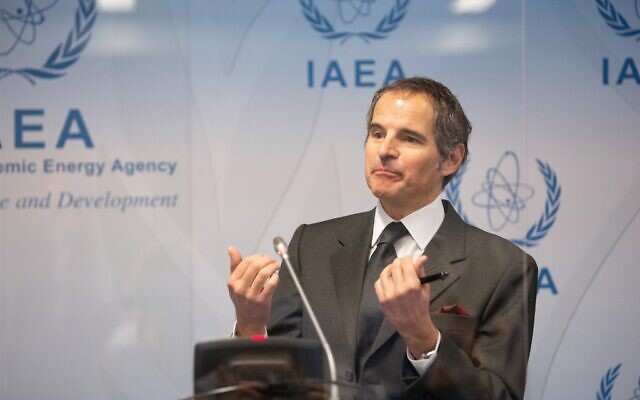 The head of the United Nations nuclear watchdog has said Iran is enriching uranium to levels that only countries seeking to make atomic weapons reach, and that the Islamic Republic’s nuclear program can no longer be returned to where it stood when a landmark 2015 deal was struck with world powers.

“A country enriching at 60 percent is a very serious thing — only countries making bombs are reaching this level,” International Atomic Energy Agency chief Rafael Grossi said in an interview with the Financial Times published on Wednesday and cited by the Reuters News Agency.

“Sixty percent is almost weapons-grade, commercial enrichment is 2, 3 [percent],” he said. “This is a degree that requires a vigilant eye.”

Though Grossi conceded that Iran has the right to develop its nuclear program, he warned of the consequences of it going too far.

“You cannot put the genie back into the bottle — once you know how to do stuff, you know, and the only way to check this is through verification,” he said, referring to checks by UN monitors.

With the sophistication that Iran has achieved, “you want a really strong, very sturdy verification system,” he said.

Grossi’s remarks came as world powers resumed talks with Iran to save the 2015 nuclear agreement that limited the Iranian nuclear program in return for sanctions relief. The US has since pulled out of the pact, applying sanctions, after which Iran began to publicly renege on its own commitment to the deal.

Iran’s violations since the US withdrawal from the deal include a significant increase in the purity and quantity of uranium it has been enriching, effectively reducing the so-called breakout time to produce an atomic bomb. Iran says it does not want to build an atomic bomb, insisting that its nuclear program is for civilian purposes only.

Though the West fears the purified uranium could be used to help Tehran potentially obtain an atomic bomb, US intelligence agencies have said they “assess that Iran is not currently undertaking the key nuclear weapons-development activities… necessary to produce a nuclear device.”

Read more at The Times of Israel