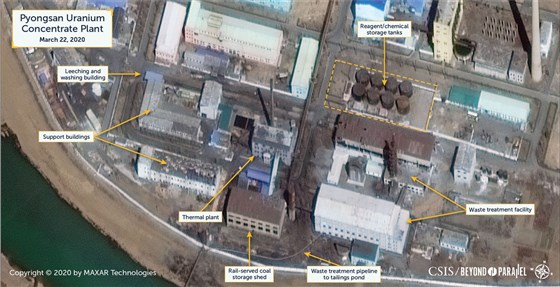 A key source of material for North Korea’s nuclear program remains operational and continues to be updated, according to a coming report based on recent satellite photos that underscores the persistence of a top threat to U.S. national security.

Among the indicators of continued yellowcake production, researchers found, are full tanks of chemical waste and the continued accumulation of solid and liquid waste in a pond at the facility. The full report, to be released next month, will show new construction at the compound, the researchers said.

Cha, who was President George W. Bush’s top Korea adviser, said the continuing work at the facility demonstrates the North Koreans’ “unrelenting effort to grow their capabilities despite three summits and the utter failure of the one diplomatic negotiation that Trump has put any effort into.”

Cha, an NBC News contributor, was considered by the Trump administration to be the U.S. ambassador to South Korea, but the idea was dropped after he raised concerns about a possible limited military strike on North Korea.

The Korean Central News Agency said officials discussed “new policies for further increasing the nuclear war deterrence of the country and putting the strategic armed forces on a high alert operation,” as well as increasing the capabilities for deterring “the threatening foreign forces.”

Kim emerged in public recently after a long absence from view that fueled speculation about his health.