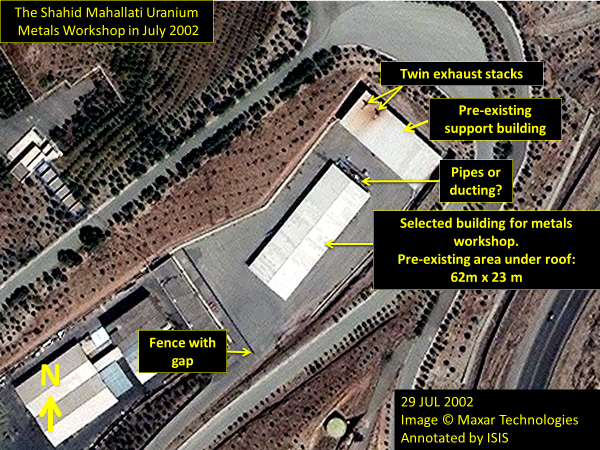 Based on documents in the Iran Nuclear Archive, seized by Israel in early 2018, Iran’s Amad Plan created the Shahid Mahallati Uranium Metals Workshop near Tehran to research and develop uranium metallurgy related to building nuclear weapons. Figure 1 shows this site as it looked in 2002 and 2003, when an existing workshop was renovated and brought into operation. The facility was intended as a pilot plant, aimed at developing and making uranium components for nuclear weapons, in particular components from weapon-grade uranium, the key nuclear explosive material in Iranian nuclear weapon cores. The site was meant to be temporary, until the production-scale Shahid Boroujerdi facility at Parchin was completed. However, the Shahid Mahallati facility was capable of making the first cores of weapon-grade uranium, in case Shahid Boroujerdi was unfinished when weapon-grade uranium would have had become available.

The sidebar shows the Amad Plan’s pathway to nuclear weapons, based on information in the Nuclear Archive. Highlighted is the role of Shahid Mahallati in that process of making nuclear weapons.

Analysis of commercial satellite imagery confirms the location of the Shahid Mahallati site based on comparison with exterior ground photos, and a chronology of the site’s status is included in this report. The key building of the site, the uranium metals workshop, was apparently gutted and abandoned between late 2010 and early 2011. This action may have been triggered by the Western discovery and exposure in late 2009 of the secret, deeply buried Fordow enrichment plant, formerly called the Al Ghadir project under the Amad Plan (see sidebar).

Iran should declare this site to the International Atomic Energy Agency (IAEA) and allow its inspection, since the facility was designed and built to handle nuclear material subject to safeguards under Iran’s comprehensive safeguards agreement. The IAEA, more generally, should verify sites, locations, facilities, documentation, equipment, and materials involved in the Amad Plan activities, and urge Iran to cooperate fully in these investigations, despite their age, as part of ensuring that Iran has not continued nuclear weapons work up to today.

Read more at Institute for Science and International Security