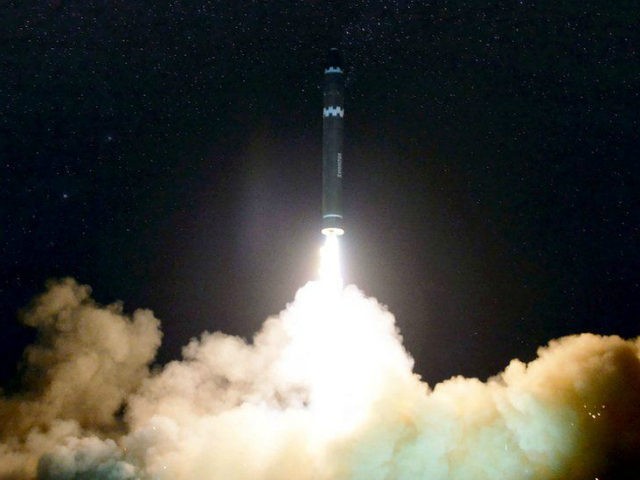 An expert from the Stockholm International Peace Research Institute (SIPRI), which tracks military development around the world, told South Korean reporters on Monday the communist regime in North Korea may have as many as 40 nuclear weapons by the end of the year.

The research institute estimated that Pyongyang controlled between 20 and 30 nuclear weapons by the end of 2018.

Dictator Kim Jong-un has attempted, through several meetings with President Donald Trump and other world leaders, to portray his regime as being increasingly less interested in nuclear development and more interested in attracting tourism and foreign investment to keep Kim’s luxury lifestyle viable. North Korea is under one of history’s strictest global sanctions regime as a result of nuclear weapons testing in 2017, which even its closest ally, China, opposed.

Chinese Communist Party leader Xi Jinping most recently visited Pyongyang in June, vowing support for the communist regime there based on “shared ideals, beliefs, and goals.” Kim reportedly urged Xi to invest more heavily in the North Korean economy in exchange for loyalty on the world stage.

China has yet to move at the U.N. Security Council level to lift sanctions on North Korea, though its regime has called American sanctions on rogue states “human rights violations.”

South Korean newspaper Chosun Ilbo reported on Tuesday that the SIPRI had evidence that, despite Kim’s claims that his regime wishes to move on from nuclear weapons development, North Korea was still enriching nuclear fuel and building warheads. SIPRI researcher Dan Smith provided the estimate of up to 40 North Korean nuclear weapons to reporters in Seoul, suggesting that one reason talks with Washington have stalled is because North Korea does not consider its nuclear development to run afoul of its own calls for “denuclearization.”

“The definition of denuclearization is a big thing to be worked out,” he told reporters.