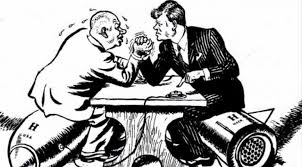 Russia’s Deputy Foreign Minister Sergei Ryabkov warned that the deployment of U.S. land-based missile systems near Russia’s borders were comparable to the same situation that sparked the Cuban Missile Crisis in 1962.

Russia has historically been critical of any plan by the United States to deploy missile systems in Eastern Europe. Additionally, Russia has condemned the U.S. withdraw from the Intermediate-Range Nuclear Forces Treaty.

The Cuban Missile Crisis was an event in 1962 when Russia sent nuclear missiles to Cuba in response to U.S. deployment of missiles to Turkey. This crisis was the closest the world came to nuclear war. The crisis resolved when the U.S. and Russia negotiated removal of Russian missiles from Cuba in exchange for the United States removing missiles from Turkey. Additionally, the United States pledged to not invade Cuba or assist any other force in the overthrow of the Cuban government.

Regarding the current situation, Ryabkov was quoted, “If things get as far as an actual deployment on the ground of these sorts of systems, then the situation won’t just get more complicated, it will escalate right to the limit…We could find ourselves in a situation where we have a rocket crisis close not just to the crisis of the 1980s but close to the [Cuban Missile] crisis.”

Russian President Vladimir Putin stated in February this year when he warned that Russia would match any U.S. deployment near Russia by either stationing Russia missiles closer to the United States or deploying faster missiles which are claimed to be able to evade any potential missile defense system. Faster missiles would also give the U.S. less time to respond to an attack.

Earlier in February, the United States said it would withdraw from the Intermediate-range Nuclear Forces Treaty with Russia in six months unless Moscow ended alleged violations arms control pact. Russia has denied any violations and claims the U.S. is the one violating the treaty.