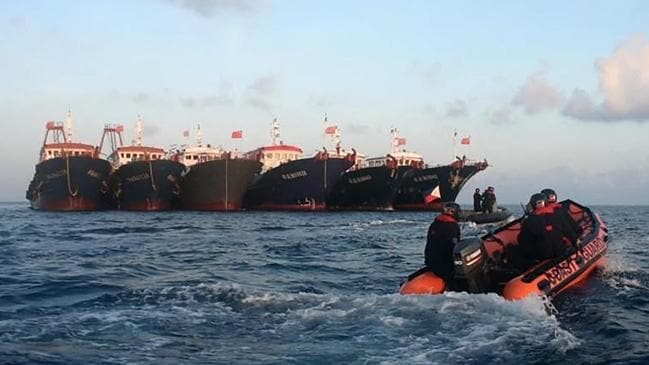 Decades of writings by China’s top tacticians reveal this to be so.

“National security leaders should look closely at what Chinese officials’ words and China’s military actions say about how the People’s Liberation Army might actually fight a war,” a US military academy analysis warns.

They say it’s a war already well under way. That means the start of any ‘conventional’ conflict will be murky and confused. And, even once the shooting starts, sowing doubt and disbelief will be a significant weapon in its arsenal.

It will involve police.

It will involve militias.

It will involve civilians.

And all will serve to pave the way for the People’s Liberation Army’s more traditional weapons to find its target.

It’s the space between peace and war.

It’s where coercion, intimidation, propaganda and manipulation are at play.

“Democracies’ fear of escalation is a significant deterrent against the use of violent military options in the grey zone, and that is exactly the fear that authoritarian states … wish to instil,” wrote retired British army colonel Richard Kemp.

It’s about twisting democratic values – such as the rule of law – against itself.

“The PLA is engaging in irregular warfare today,” the West Point paper asserts. “China is employing lawfare to achieve strategic aims. The maritime militia is enforcing China’s sovereignty claims in the East and South China Seas against US partners and allies.”

And it has already weaponised international information flows and channels of influence, along with cyber, economic – and psychological – tactics.

“Russia and China plan on winning the Great Power Competition by undermining the US, sowing discord, and continuing a secret war until the positions in the world order are reversed,” an essay by US navy analyst Derek Bernsen argues.

They already exist. But a few well-placed social media posts and complicit “influencers” can nudge them in beneficial directions.

After evolving a digital heart (not the pacemaker kind) out of inky veins, Jamie just wants an excuse to learn something new. But he's fully aware his 32 years' experience in the news industry has given him just enough knowledge to be dangerous. International affairs. History. Defence. Science. Space. Technology. He has a fascination for them all - particularly when it comes to social fallout. Translating tough concepts into common terms is his craft. His passion is to explore the big picture encompassing world events.