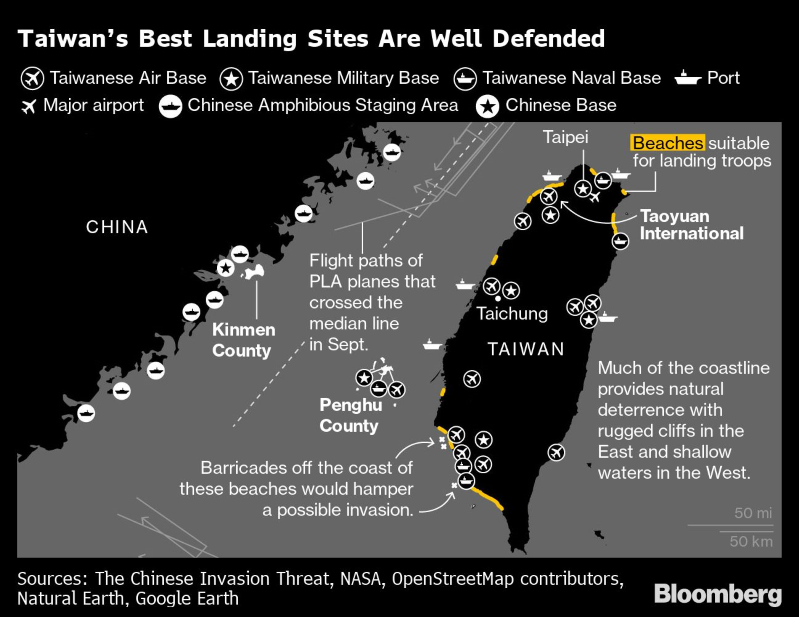 Xi Jinping’s Chinese Communist Party has threatened to invade Taiwan for more than seven decades. Now fears are growing among analysts, officials and investors that it might actually follow through over the next few years, potentially triggering a war with the U.S.

In September, People’s Liberation Army aircraft repeatedly breached the median line in the Taiwan Strait, eliminating a de facto buffer zone that has kept peace for decades. The party-run Global Times newspaper has given a picture of what could come, urging China’s air force to patrol the skies over Taiwan and “achieve reunification through military means” if it fires any shots. Taiwan announced it would only shoot if attacked.

Despite the saber rattling, China and Taiwan have many reasons to avoid a war that could kill tens of thousands, devastate their economies and potentially lead to a nuclear conflict with the U.S. and its allies. The overwhelming consensus remains that Beijing will continue efforts to control Taiwan through military threats, diplomatic isolation and economic incentives. Equities in Taiwan have recently hit record highs.

But several forces may push them toward action: President Xi Jinping’s desire to cement his legacy by gaining “lost” territory, falling support among Taiwan’s public for any union with China, the rise of pro-independence forces in Taipei and the U.S.’s increasingly hostile relationship with Beijing on everything from Hong Kong to the coronavirus to cutting-edge technology.

“I am increasingly concerned that a major crisis is coming,” said Ian Easton, senior director at the Project 2049 Institute who wrote “The Chinese Invasion Threat: Taiwan’s Defense and American Strategy in Asia.” “It is possible to envision this ending in an all-out invasion attempt and superpower war. The next five to 10 years are going to be dangerous ones. This flash point is fundamentally unstable.”

Taiwan will be among the most pressing security issues facing whoever wins the U.S. election on Nov. 3.