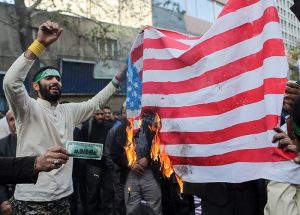 Opposition to the US has been a key component of the theocratic Iranian regime’s identity since 1979. The founder of that regime, Ayatollah Ruhollah Khomeini, labeled the US the “Great Satan.” That moniker was no mere slur.

According to Khomeini, Western colonizers had infected societies such as Iran with secular values that served to undermine the more stable and independent religion-based order of the past. As the most powerful Western nation, and an ally of the brutal Shah of Iran before he was deposed, the US was a convenient target to embody the Great Satan.

For the nascent Islamic Republic of Iran, this narrative had multiple benefits. It appeased the Soviet empire, with which Iran shared a border. Shared antipathy toward the US neutralized the threat of a Soviet invasion. But this narrative also helped Khomeini rebrand Iran and assert its influence in the Middle East in direct contrast to the American presence in the region. And this is the battle in which we are embroiled today.

Relations weren’t always this strained between Iran and the US, despite Khomeini’s attempts to portray America as an existential enemy.

In 1946, President Harry S. Truman delivered an ultimatum demanding that Soviet troops leave Iran. At the time, the Soviets were pressuring Iran to gain favorable oil rights. The US was vocal at the new UN Security Council about Soviet intentions in Iran and about the importance of Iranian sovereignty, and Soviet troops departed.

In the early 1950s, the US continued to support Iranian nationalism by serving as a broker between Britain and Iran during a struggle over oil rights. Truman in fact blocked British plans for a takeover of oil fields and a refinery in Iran.

This history of positive relations often gets forgotten, however, because the US is blamed for the 1953 overthrow of Iranian PM Muhammad Mossadegh.

Read more at The Begin-Sadat Center For Strategic Studies