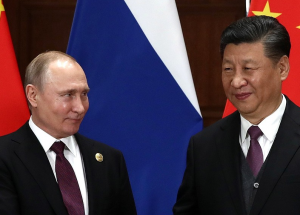 The most popular topic in modern geopolitics these days is probably the budding relationship between Russia and China. Articles on the subject are produced regularly, almost all of them concluding that Russia is only temporarily siding with China. It is just a matter of time, these articles claim, until disagreements between the two powers become inevitable.

These articles miss the fact that Moscow’s move away from Europe is rooted deeply in Russian history. It goes back much further than the Ukrainian crisis, which triggered Moscow’s recent troubles with the West.

The Russian-Chinese partnership is built around their common animosity toward the US. Both have been confronted by the US and have taken actions that go against Washington’s worldview, which favors a division of the Eurasian landmass among multiple powers and the maintenance of control over the world’s oceans.

These issues drove Moscow and Beijing to work together, but it should also be noted that each stealthily tries to use the other to gain political leverage in economic, military, and other spheres. Indeed, Russian tactics since the deterioration of relations with the West in 2014 have been to move closer to China and other Asian states, such as Iran and Turkey, to show how far Moscow is willing to distance itself from the West against the background of growing US-China competition.

Putin’s strategy seems to have worked to a degree, as various statements and policy moves over the past year or so indicate that the West is anxious not to lose Russia to Asia (especially to China). As troubles with China grow and the West is forced to contemplate the possibility of a China-led world, the loss of Russia would be tantamount to a geopolitical catastrophe.

That is because in that scenario, Chinese influence would spread to most of Eurasia and even to the Arctic, which is a rising geopolitical hotbed. Recall the first decades of the Cold War, when the Moscow-influenced communist movement controlled territory from Berlin to Vietnam.

Read more at The Begin-Sadat Center for Strategic Studies

Emil Avdaliani specializes on former Soviet space and wider Eurasia with particular focus on Russia's internal and foreign policy, relations with Iran, China, the EU and the US. He teaches history and international relations at Tbilisi State University and Ilia State University (Georgia). He has worked for various international consulting companies and regularly publishes various works with BESA on military and political developments across Eurasia