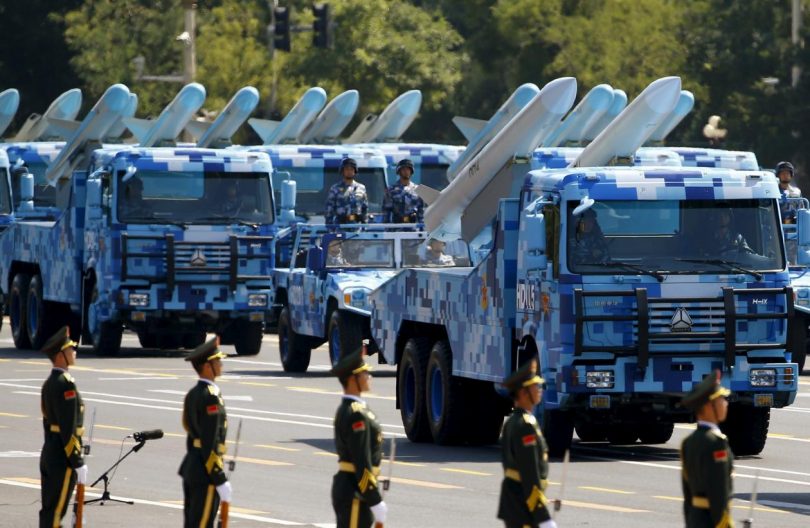 With the seventieth anniversary of the People’s Republic of China (PRC) just around the corner, experts following the evolution of the Chinese military are on the edge of their chairs. What new and shiny toys will be unveiled? After all, it was only four years ago that the People’s Liberation Army (PLA) sent a shock through the community of American strategists by publicly revealing two different anti-ship ballistic missiles (ASBMs), DF-21D and also the longer-range DF-26. That moment might go down in history as one in which the lopsided Asia-Pacific military balance was suddenly altered.

Will there be another such moment and one in which the “balance” is further overturned? There is already speculation that China may display its new mobile ICBM, the DF-41. That is a weapon, after all, that is said to be capable of reaching all American states, except lucky Florida. Another possible candidate for Beijing’s spectacle would be the much-anticipated Chinese stealth bomber. One Chinese strategist recently claimed that this would be China’s answer to the possible deployment by Washington of myriad intermediate range missiles around the “first island chain.” It would be especially interesting to see if Beijing is indeed going in for either its own VSTOL jet fighter, which has been dubbed J-18, or even a type of Chinese tilt-rotor equivalent of the Osprey transport.

However, it is important to once again emphasize that the naval balance is impacted by vessels that may lack dramatic flair. Indeed, “tin cans” or small to medium surface combatants remain the workhorse for almost all navies. The same is true for naval aviation, where a seeming ugly duckling can sometimes turn out to be more important than some sleek interceptors. For instance, during World War II, the U.S. Navy’s PBY-6A Catalina flying boats were an example of such units. In this case, a rather unsightly, but still significant “duckling” has appeared in the June 2019 edition of the Chinese naval magazine Shipborne Weapons [舰载武器].

Lyle J. Goldstein is Research Professor in the China Maritime Studies Institute (CMSI) at the United States Naval War College in Newport, RI. In addition to Chinese, he also speaks Russian and he is also an affiliate of the new Russia Maritime Studies Institute (RMSI) at Naval War College. You can reach him at [email protected] The opinions in his columns are entirely his own and do not reflect the official assessments of the U.S. Navy or any other agency of the U.S. government.