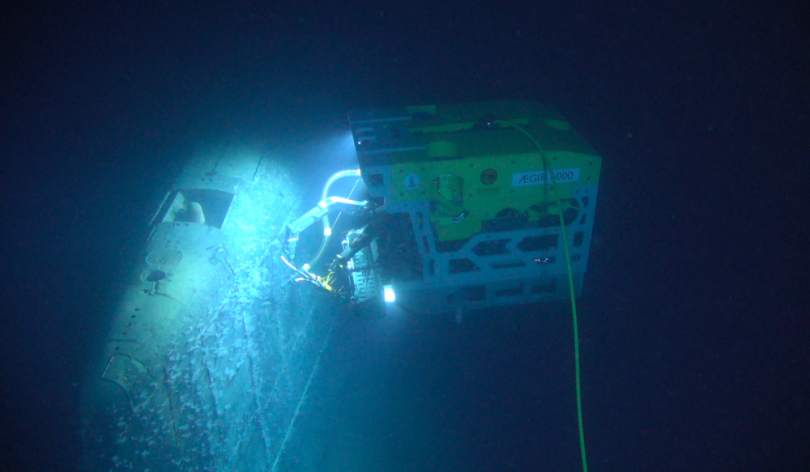 The joint Norwegian-Russian expedition on board research vessel “G. O. Sars” is starting to see results from radiation samples collected on and around the Northern Fleet submarine that sank south of the Bear Island in the Norwegian Sea in 1989.

The highest level researchers found was around 800 Bq per litre. Typical levels for seawater in the Norwegian Sea today are around 0.001 Bq per litre. In other words; the samples shows radioactivity 800,000 times higher than normal, Norway’s Institute of Marine Research informs.

Another sample showed 100 Bq/l. Other samples from the same pipe hole showed normal levels, making the researchers believe radioactivity are pumped out in steams varying with the ocean currents at the site.

Expedition leader Hilde Elise Heldal is not surprised to discover leakages of radioactivity from this pipe on the tower of the submarine wreak.

We took water samples at this particular pipe because it was here the Russians documented leakages both in the 90ties and last time in 2007,” Heldal says. She underlines that 100 Bq/l is not dangerous at all. “After the Chernobyl-accident in 1986, Norwegian authorities set an upper limit of 600 Bq per kilo.”

The 600 Bq/kg limit is for food consumption; fish or meat.

“Komsomolets” (K-278) rests at the seafloor at a depth of 1,680 meters, where there are very little marine life, so the risks of having the radioactivity into the food chain is very little.

“Komsomolets” has one 190-megawatt reactor and two torpedoes with plutonium warheads, each about 3 kg.

The leakages of radioactive Cesium-137 discovered is from the reactor.

“What we have measured has very little impact on Norwegian fish and seafood. Levels [of radioactivity] in the Norwegian Sea are in general very low, and the pollution from “Komsomolets“ is quickly diluted to harmless levels because the wreak is at such deep water,” Hilde Elise Heldal says.

Read more at The Barent Observer