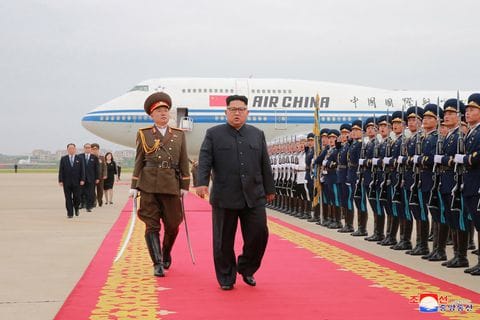 The warheads — at least 20 in number, and perhaps as many as 60 — remain for now in their bunkers, somewhere in the rugged hills north of Pyongyang. Until today, there has been no public pledge from North Korea to dismantle them, or to allow inspectors to see them, or even to disclose where they are kept.

Work continues daily in the country’s radiochemistry lab near Yongbyon, where plutonium for new bombs is extracted from spent fuel rods. Just across a small river from the lab, testing continues on a 20-megawatt reactor capable of producing nuclear fuel for scores of additional bombs.

The facilities are among hundreds that exist across a North Korean weapons complex that has shown itself capable not only of making sophisticated nuclear and chemical weapons, but also of expertly hiding them from public view. It is why weapons experts around the world expressed astonishment Wednesday at President Trump’s claim that the danger posed by Pyongyang’s decades-long weapons buildup had been effectively eliminated — that there was, as Trump wrote in a Twitter posting, “no longer a nuclear threat from North Korea.”

While the U.S.-North Korean summit may have lessened the immediate risk of a war, the elimination of the North Korean threat is at best a distant prospect, according to weapons experts and veterans of past negotiations with Pyongyang. Such an achievement would require difficult negotiations, years of dismantling and verification, and — perhaps most important — a profound change in the behavior of a state with a long history of cheating and deception on its past commitments, analysts said.

Hours after Trump’s declaration of victory at the Singapore summit, some derided the notion of a suddenly defanged North Korea as naive and perhaps even delusional.

“North Korea’s capabilities today are no different than they were a week ago,” said Robert Einhorn, a Brookings Institution scholar and formerly a State Department arms-control official under Republican and Democratic administrations. Einhorn, who sat across the table from North Korean negotiators during previous talks on restraining the country’s missile program, said the elimination of the North Korean nuclear threat had occurred so far only within a “parallel universe” inside the president’s mind.

Joby Warrick joined The Washington Post’s National staff in 1996. He has covered national security, the environment and the Middle East and writes about terrorism. He is the author of two books, including 2015’s “Black Flags: The Rise of ISIS,” which was awarded a 2016 Pulitzer Prize for nonfiction. His first book, “The Triple Agent,” recounts the 2009 suicide attack by an al-Qaeda informant on a CIA base at Khost, Afghanistan, that killed seven U.S. intelligence operatives. Before joining The Post, Warrick covered the fall of communism in Eastern Europe as a UPI correspondent and worked as a reporter at the Delaware County (Pa.) Daily Times, the Philadelphia Inquirer and the News & Observer of Raleigh, N.C. While in Raleigh, he co-authored “Boss Hog,” a series of investigative stories that documented the political and environmental fallout caused by factory farming in the Southeast. The series won the 1996 Pulitzer Prize Gold Medal for public service.