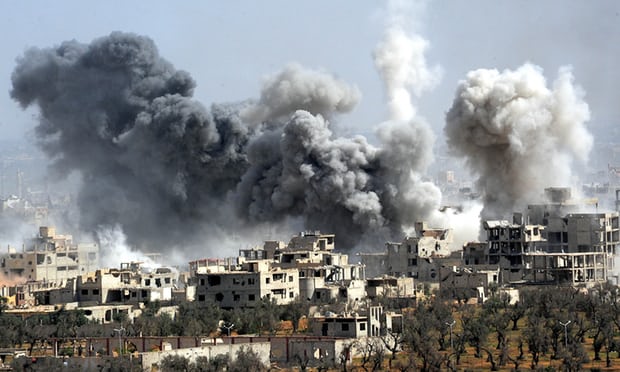 James Mattis, the US defense secretary, has said Washington is still looking for evidence on who carried out Saturday’s chemical weapons attack in Damascus and said his main concern about a military response was how to stop it “escalating out of control”.

However, the French president, Emmanuel Macron, said on Thursday that his government had “proof” that the government of Bashar al-Assad was responsible for the attack, which is reported to have killed about 50 people and affected hundreds more.

NBC and CNN quoted US officials as saying that blood and urine samples from the victims of Saturday’s attack showed traces of chlorine and a nerve agent, and that US intelligence had other evidence pointing to the regime’s culpability, which would be presented to the president.

But Mattis’s cautious tone on Thursday echoed a morning tweet by Donald Trump that appeared to walk back his threat of imminent action 24 hours earlier.

On Wednesday, the president tweeted that US missiles “will be coming” and told Russia, which has forces in Syria, to “get ready”. But the next morning, Trump tweeted that he “never said when an attack on Syria would take place”. An attack, the president said “ could be very soon or not so soon at all!”

In testimony to the House armed services committee, Mattis said that tweet meant that Trump “has not made a decision”. He pointed out that Trump would meet his top national security advisers at the White House on Thursday afternoon where he would be presented with a full range of options.

Read more at The Guardian