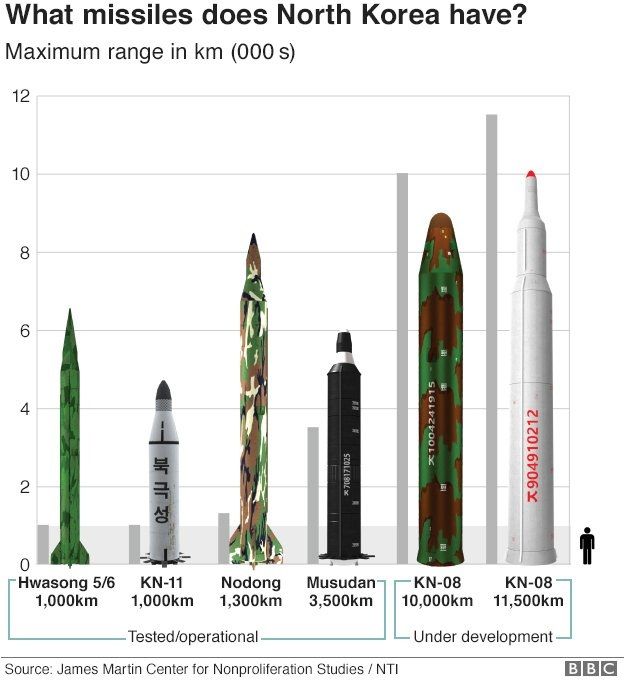 Launching a rocket over Japanese territory – with at least the possibility that it could break up and deposit debris on Japanese soil – shows that Pyongyang is intent on maintaining its brinkmanship – this was only the third missile test to over-fly Japan within the past two decades. However, this may perhaps be brinkmanship only to a point.

It is noteworthy that North Korea did not make good on its threat to direct a missile towards the US Pacific territory of Guam – something that might well have precipitated a US military response.

But equally clearly it shows that the Trump administration’s assertions earlier this month – after a round of escalating threats between Washington and Pyongyang – that the North Korean regime was now pausing for thought, were premature.

So here we are again, facing the question of what to do about North Korea as it moves rapidly forward with its linked ballistic missile and nuclear weapons programmes.

There are five declared nuclear weapons states: Britain, France, the US, China and Russia.

Three countries who never signed up to the NPT deal did develop nuclear weapons arsenals: Israel, India and Pakistan.

So what would it mean if North Korea joined this trio?

Read more at at the BBC

Jonathan Marcus has reported on and analysed defence and security issues for the BBC for more than 30 years. He has a PhD in contemporary European politics and has written for numerous journals as well as publishing a book on the French National Front.