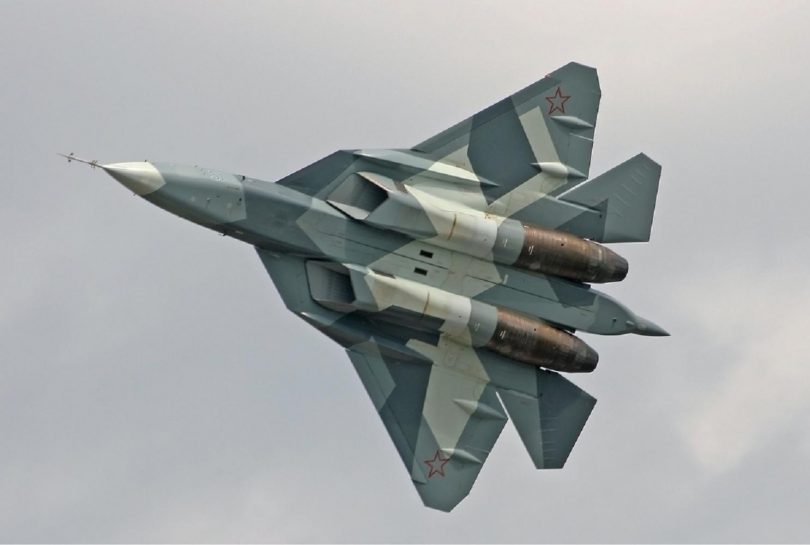 The problem is simple.

The Russian defense ministry staged an impressive video shoot with four of its Su-57 stealth fighter prototypes. But the dramatic display doesn’t make the Su-57 any more relevant.

The Su-57 is beautiful. It’s also too expensive for Russia to buy in meaningful numbers.

In the November 2018 videos, produced by the Kremlin’s Zvezda T.V., four of the twin-engine Su-57s fly in close formation with the An-12 photo plane. Two of the radar-evading prototypes land at the same time. A single Su-57 performs a flat spin.

The four Su-57s in the video account for nearly half of the 10 of stealth fighters the Russian air force has acquired since the type first flew in 2010. Two Su-57s briefly deployed to Syria in February 2018. The Kremlin claimed, without firm proof, that the planes flew strike missions during the deployment.

The Kremlin ordered its first dozen production-standard Su-57s in August 2018, hoping to form the first regular squadron some time in 2019. With military budgets declining amid an economic slump, Moscow decided to not acquire the plane in large numbers.

It’s unclear how much the Su-57’s development has cost so far, how much the program would need to complete development and how much each production-standard plane would set back Russian taxpayers. The U.S. military spent more than $60 billion acquiring around 180 F-22s and expects to spend $400 billion buying some 2,300 F-35s.

The Russian government tried to spin the decision to curtail the Su-57 effort. “You know that today the Su-57 is considered to be one of the best aircraft produced in the world,” Yuri Borisov, Russia’s deputy defense minister, told a T.V. audience in July 2018. “Consequently, it does not make sense to speed up work on mass-producing the fifth-generation aircraft.”

Time is running out for the Russian air force to integrate the Su-57 into its force structure. The “fifth-generation” stealth fighter began development in the early 2000s, but its fortunes are tied to the Kremlin’s 2009 defense strategy, which aimed to reverse years of budget cuts and declining military readiness.