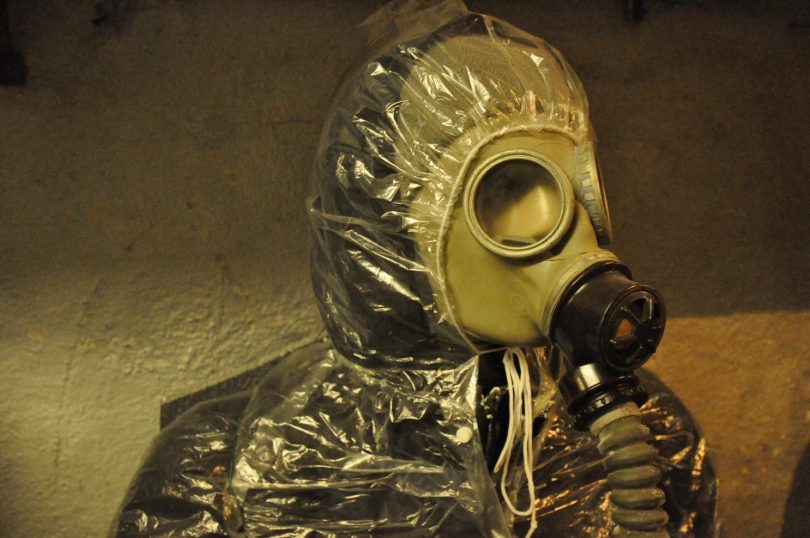 The history of civil defense in America is one of long neglect and avoidance since the Cuban Missile Crisis. “[P]eople just didn’t want to think about it . . . [I]f bomb shelters reduced casualties from, say, 100 million to 50 million, that still means tens of millions of dead,” says Mark, the author of Atomic Skies. Other than rusting yellow-and-black “Fallout Shelter” signs on public buildings, almost nothing remains of American civil defense efforts.

The special terror in nuclear deterrence reveals itself during natural rather than human-made disasters. Despite early warnings, extensive transport networks, government preparations and lots of money, thousands still suffer in the aftermath of great storms and fires. Nuclear-tipped ICBMs arrive with the surprise and speed of earthquakes, leaving whole populations sitting like ducks before the fury.

The devastation wrought by the great bombing raids of World War II, culminating in the atomic strikes on Hiroshima and Nagasaki, reinforced a cave-dwelling mindset that arose from the trenches of World War I and the rise of air power in the interwar years of the twentieth century. Early in the Atomic Age it seemed that the bunker building undertaken during the war could be extended in magnitude. As the bombs got bigger, however, the plans for shelter got wilder.

Two factors complicated civil defense from nuclear attack: hazard and numbers. Nuclear weapon effects are so enormous that extreme protective measures are necessary, yet the costs of thus protecting large populations quickly become astronomical. Those costs are not just in the vast constructions required, but also the major social rearrangements demanded of long-term communal shelter life.

Still, answers were found to President Dwight Eisenhower’s 1956 question to the Gaither Committee on civil defense: “If you make the assumption that there is going to be a nuclear war, what should I do?”