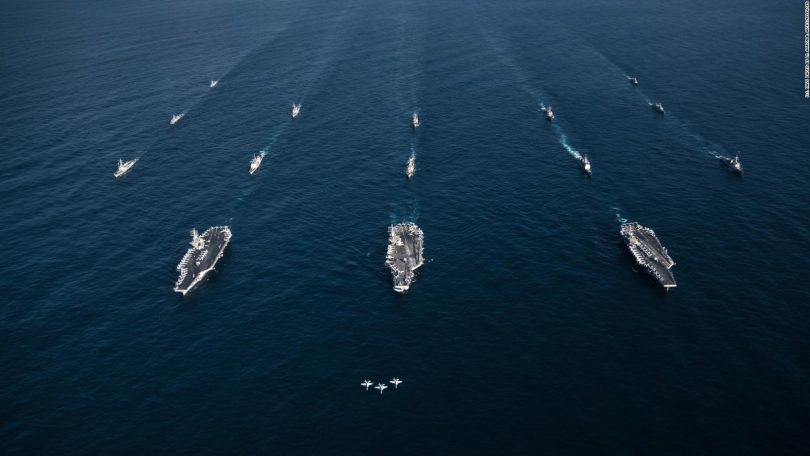 It was a once-in-a-decade display of American firepower.

Three US Navy aircraft carriers — the largest, most sophisticated warships in history — assembled off the Korean Peninsula, in a move timed to coincide with US President Donald Trump’s first official visit to the region.
But behind the dramatic show of force, questions are emerging as to whether the US Navy is up to the challenges it faces in the Pacific — from both a nuclear-armed North Korea and a strengthening China — at a time when its top leaders acknowledge it lacks the money, manpower and weapons to ensure success. And when a massive corruption scandal threatens the ranks of dozens of its top officers.
The three-carrier exercise, conducted in early November with South Korean and Japanese warships, was just one of about 160 multilateral and bilateral exercises performed this year in the area of operations overseen by the Navy’s 7th Fleet, a Navy spokesperson told CNN. That’s about one exercise every two days.
And the tempo of operations isn’t slowing.
Just two days after the three carriers — the USS Ronald Reagan, USS Theodore Roosevelt and USS Nimitz, and their multi-ship strike groups — wrapped up four days of war games off Korea, the USS Ronald Reagan, with its air wing and three guided-missile destroyers, began a 10-day exercise with Japanese naval units off Okinawa.
While the US exercises are intended to reassure Asian allies and to show North Korean leader Kim Jong Un that the United States will not be intimidated by Pyongyang’s testing of nuclear weapons and ballistic missiles, the moves also highlight concerns that the 7th Feet is being stretched too thin.
The toll of operations in the Pacific has been grim this year.
Two US guided-missile destroyers, USS Fitzgerald and USS John S McCain, suffered collisions with merchant ships, leaving 17 US sailors dead and the two warships needing hundreds of millions of dollars in repairs.
The accidents, off Japan and Singapore respectively, also left the Navy wondering how two of the most sophisticated ships on the seas couldn’t even navigate crowded shipping lanes.
In total, the 7th Fleet has clocked up five major non-combat incidents in 2017 involving ships and an additional two involving aircraft, including Wednesday’s crash in the Philippine Sea of a plane taking personnel to the Reagan.
Read more at CNN
Post Views: 1,311