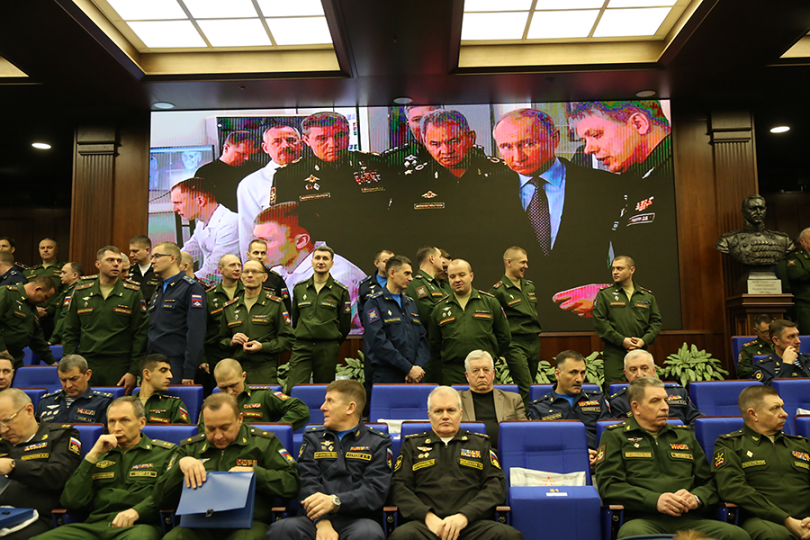 If the 1987 Intermediate-Range Nuclear Forces (INF) Treaty collapses in 2019, the United States, key U.S. allies, and Russia will face critical questions of how to respond, including whether to develop and deploy new intermediate-range missile systems and whether to seek restraint measures to prevent a renewed missile race in Europe and beyond.

Russian President Vladimir Putin is seen on the screen during an annual meeting with high-ranking military officers on December 18, 2018 in Moscow. Putin told them that if the United States “breaks the [INF] treaty,” Russia will be “forced to take additional measures to strengthen [its] security.” (Photo: Mikhail Svetlov/Getty Images)Washington and Moscow have not shown a willingness to go the extra mile to resolve their years-long INF Treaty compliance dispute, as the clock runs down on U.S. Secretary of State Mike Pompeo’s Dec. 4 ultimatum, under which Russia has 60 days to return to “full and verifiable compliance” or the United States will suspend its obligations and issue a formal notice of its intent to withdraw from the treaty.

Rather, each side has been laying the groundwork to blame the other for the treaty’s demise and, in that case, to advance new weapons systems.

At the direction of Congress, the Defense Department began early research and development activities on concepts and options for conventional, intermediate-range missile systems in late 2017. If the administration moves to withdraw from the treaty, it could ramp up funding to accelerate development.

Russian President Vladimir Putin stated on Dec. 18 that if the United States “breaks the treaty,” Russia will be “forced to take additional measures to strengthen [its] security.” He further warned that Russia could easily conduct research to put air- and sea-launched cruise missile systems “on the ground, if need be.”

Since 2014, Washington has accused Moscow of violating its commitment not to possess, produce, or flight-test a ground-launched cruise missile (GLCM) having a range prohibited under the INF Treaty. The Trump administration later identified the missile as the 9M729. In 2017 the Pentagon alleged that Russia began fielding the missile.

Kingston Reif is the Director for Disarmament and Threat Reduction Policy at the Arms Control Association, where his work focuses on nuclear disarmament, deterrence, and arms control, preventing nuclear terrorism, missile defense, and the defense budget. Reif is an expert on the legislative process and closely monitors Congressional action on these issues. Prior to joining the Arms Control Association, Reif was the Director of Nuclear-Nonproliferation at the Center for Arms Control and Nonproliferation and Council for a Livable World. Reif originally came to the Center in 2008 as a Herbert Scoville Jr. Peace Fellow. From September 2008 until May 2009 he served as Dr. Morton Halperinâ's research assistant on the Congressional Strategic Posture Commission. Reif returned to the Center in May 2009 as the Deputy Director of Nuclear Non-Proliferation. Reif holds a B.A. in International Relations from Brown University. He spent two years in the U.K. as a British Marshall Scholar where he received a MSc. in International Relations from the London School of Economics and Political Science and a M.Litt. in International Security Studies from the University of St. Andrews. He is a 2014 Truman National Security Project Fellow and a 2018 Shawn Brimley Next Generation National Security Leaders Fellow. Reif has published articles and op-eds in various outlets, including the Washington Post, Foreign Policy, DefenseOne, Time, Defense News, and the Hill. He has been quoted in such publications as The Economist, The New York Times, Time, Defense News, National Journal, FoxNews.com, and US News and World Report. He has also been interviewed on TV and radio outlets, including C-SPAN's Washington Journal program, CNN's The Situation Room with Wolf Blitzer, and Al-Jazeera.