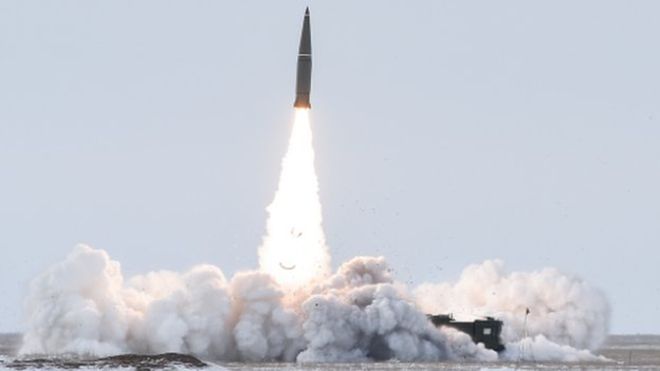 The threat of nuclear war fills people with fear. Yet the increasingly blurred line between nuclear and conventional weapons is heightening the danger.

Nuclear and non-nuclear weapons have never been entirely separate from each other.

The B-29 bomber, for example, was designed and built to deliver conventional bombs. But on 6 August 1945 one of these aircraft, Enola Gay, dropped a nuclear weapon on the Japanese city of Hiroshima.

The global stockpile of nuclear weapons is down from an all-time high of about 64,000 in 1986 – but some contemporary weapons are about 300 times more powerful than the bomb dropped on Hiroshima.

Apart from the UK, all nuclear-armed states possess dual-use weapons that can be used to deliver nuclear or conventional warheads.

These include missiles of ever-longer ranges.

Russia, for example, has recently deployed a new ground-launched cruise missile, the 9M729.

The US believes this missile is dual-use and has been tested to distances “well over” 500km (310 miles).

The missile is at the heart of US claims Russia breached the terms of a treaty banning the use of medium- and intermediate-range missiles.

The US has announced its withdrawal from the pact, raising concerns about a new arms race.

China, meanwhile, has recently been showing off its newest missile, the DF-26.

Capable of travelling more than 2,500km (1,553 miles), it appears to be the world’s longest range dual-use missile capable of a precision strike.

There are a number of scenarios in which such missiles could inadvertently increase the chance of a nuclear war.

The most obvious is that in a conflict, they might be launched with conventional warheads but mistaken for nuclear weapons.

This ambiguity could prompt the adversary to launch an immediate nuclear response.

It is difficult to know whether it would choose this course of action – or wait until the weapons had detonated and it became clear how they were armed.