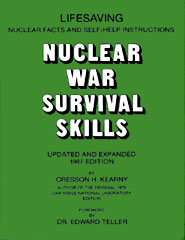 Nuclear War Survival Skills by Cresson H. Kearny is considered The Standard for preparing for and surviving the worst disaster that can befall Mankind.

Not only does it present information about nuclear war in a format that can be understood by the general public, but it also smashes the erroneous concept that nuclear war must be the end of everything.

You can survive if you prepare, and this book will help.

And it’s free!  You’ll find a link to the compete book in pdf format it at the bottom of this post.

The purpose of this book is to provide Americans and other unprepared people with information and self-help instructions that will significantly increase their chances of surviving a nuclear attack. It brings together field- tested instructions that, if followed by a large fraction of Americans during a crisis that precedes an attack, could save millions of lives. The author is convinced that the vulnerability especially of Americans to nuclear threat or attack must be reduced and that the wide dissemination of the information contained in this book will help preserve peace with freedom.

Underlying the advocacy of Americans learning these down-to-earth survival skills is the belief that if one prepares for the worst, the worst is less likely to happen. Effective American civil defense preparations would reduce the probability of nuclear blackmail and war. Yet in our world of increasing dangers, it is significant that the United States spends much less per capita on civil defense than many other countries. The United States’ annual funding is about 50 cents per capita, and only a few cents of this is spent on war-related civil defense. Unless U.S. civil defense policies are improved, you are unlikely to receive from official sources much of the survival information given in this book.

Over 400,000 copies of the Oak Ridge National Laboratory original 1979 edition of Nuclear War Survival Skills have been sold by various private publishers. A few additions and modifications, some helpful and others harmful, were made in several of these private printings. This updated and expanded edition is needed because of changes in nuclear weapons and strategies between 1979 and 1987, and because of improvements in self-help survival equipment and instructions.

In the first chapter the myths and facts about the consequences of a massive nuclear attack are discussed. Two post-1979 myths have been added: the myth of blinding post-attack increased ultra-violet sunlight, and the myth of unsurvivable “nuclear winter” – along with refuting facts.

A new chapter, “Permanent Family Fallout Shelters for Dual Use”, has been added, because the author has received many requests for instructions for building permanent small shelters better and less expensive than those described in official civil defense hand-outs. Another new chapter, “Trans-Pacific Fallout” tells how to reduce radiation dangers that you will face if one or more nations use nuclear weapons, but none are exploded on America.

Improved instructions are given for making and using a KFM, based on the findings of numerous builders since 1979. (The KFM still is the only accurate and dependable fallout radiation meter that millions of average people can make for themselves in a few hours, using only common household materials – if they have these improved instructions with patterns.) Field-tested instructions for easily made Directional Fans, the simplest means for pumping air, have been added to the “Ventilation and Cooling of Shelters” chapter. Also included in this book are scores of other new facts and updatings likely to help save lives if nuclear war strikes.

A new appendix gives instructions for a home makeable Plywood Double-Action Piston Pump, inspired by a wooden air pump the author saw being used in China in 1982.

This first-of-its-kind book is primarily a compilation and summary of civil defense measures developed at Oak Ridge National Laboratory and elsewhere over the past 24 years, and field tested by typical untrained Americans in many states, from Florida to Washington. The reader is urged to make at least some of these low-cost preparations before a crisis arises. The main emphasis, however, is on survival preparations that could be made in the last few days of a worsening crisis.